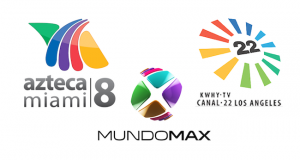 MundoMax is effectively no longer on the air. At midnight yesterday, the network’s affiliates in Miami and Los Angeles switched to other programming.

MundoMax did not do a sign-off and, apparently, never notified its viewers about the network’s shutdown and that shows would not continue airing on its final local affiliates.

But the Meruelo Media-owned KWHY-22 had kept quiet about its plans. At midnight, after broadcasting the station ID, channel 22 aired an old Mexican movie in standard definition. The station ran several such old movies throughout the day on Thursday.

An inside source says the station is “in transition,” and is “reevaluating the marketplace and planning a relaunch.”

MundoMax might be off the air, but it still has other issues to deal with in its final winding down process as it terminates the remaining staff and deals with legal issues.

Chicago affiliate KM LPTV filed a lawsuit on November 29, accusing MundoMax of fraud and breach of contract and is seeking a jury trial to resolve the issue.

You can read an analysis about what led to MundoMax’s demise on Forbes.