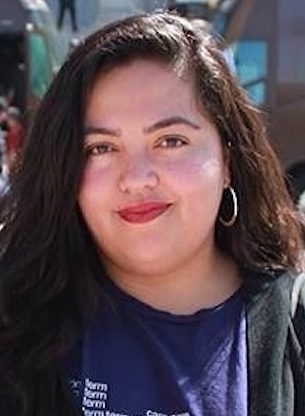 Inspired by her recent participation in the Standing Rock #NoDAPL grass-roots movement, journalist Wendy Carrillo is jumping into politics.

This week, via a lengthy post on Medium, she announced she is running for Congress to occupy the open 34th Congressional District seat that is being vacated by Los Angeles politician Xavier Becerra, who has been tapped to become the next State Attorney General of California.

“When I saw that Congressman Xavier Becerra was stepping down from his position, and taking a new position, this is a district I grew up in that I live in that I know, very very deeply. I thought this was an opportune time. It was a sign that I needed to step up in a big way,” said Carrillo.

Carrillo recently returned to Los Angeles after spending over a month and a half at the Dakota Access Pipeline protests. The long time radio show host had driven to Standing Rock to cover the conflict. Carrillo witnessed the brutal treatment of activists and suffered the effects of being tear gassed.

“I was incredibly disappointed at the lack of political leadership in general and the fact that I myself experienced a tear gas situation. I never experienced anything like that in my life,” said Carrillo.

Unhappy with the brute force by police that she was experiencing, Carrillo knew it was time to take action, but she faces a tough battle. Carrillo’s competition includes, State Assemblyman Jimmy Gomez (D-Los Angeles), and green party candidate Kenneth Mejia. Former California Speaker of the State Assembly John A. Pérez, the first candidate to announce his intention to run, has dropped out of the race due to health issues. So far, Carrillo remains the sole female candidate.

“I strongly believe that this is a moment in time when new voices and new leadership is boldly needed. I think the results of the election are a clear indication of that,” said Carrillo. “What we have known as ‘politics as usual’ or the same type of leaders that show up to the table, usually most of whom are men, [doesn’t] work anymore. The people are ready for something different.”

A Los Angeles resident and Salvadoran native, Carrillo has made a name for herself by way of radio and journalism. After getting her Masters Degree in Specialized Journalism from USC, Carrillo worked as a political reporter and correspondent for various news outlets and organizations.

In 2006, Carrillo took over the “Knowledge is Power” radio show on Power 106 FM, hosting and producing the weekly program for over 10 years. In addition, her personal blog was named “Political Blog of the Year” in 2008 by Hispanic Business Magazine.

Switching her career goal from informing the people to representing them, Carrillo expressed how she plans to keep her campaign strictly for the people and not in direct competition with the other candidates.

“It’s not a situation of like ‘I’m running against someone else’, I’m running for the people of this district. Because I want to represent them in D.C., and if they like me, they will elect me. My campaign is for them not against anybody else.”

Carrillo knows that it will be difficult to win this special election. From fundraising challenges to a crowded and developing list of candidates, Carrillo remains optimistic and confident in her ability to win.

“We’re gonna need people who are unafraid and unapologetic and 100 percent progressive to be in D.C. To be loud and to be bold and I’m that candidate. I always have been. Whether it’s been in my work in politics or in my work in journalism. It’s always been about putting people first and that’s what I want to do for this district.”

Update: This story has been updated to include the former California Speaker of the State Assembly John A. Pérez’s withdrawal from the race.