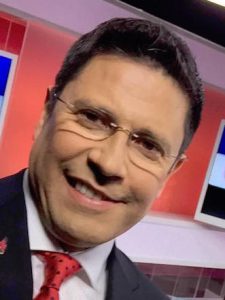 Sergio Urquidi has anchored his last newscast at Univision Phoenix. Station management has opted not to renew his contract.

Yesterday was Urquidi’s last day on the air after almost four years at KTVW-33.

A station spokesperson confirmed his departure: “We thank Sergio for his contributions and wish him well.”

Heidi Renpenning will anchor the newscasts solo while a replacement is announced.

Urquidi previously spent 12 years at Univision Network as a weekend news anchor from 1997 to 2009. He was also a senior correspondent and substitute anchor for the network’s late-night newscast “Última Hora,” and was a correspondent for the primetime newsmagazine “Aquí y Ahora.”

During a broadcast career spanning four decades, he also worked as an anchor for the now defunct NBC Canal de Noticias in Charlotte, as a reporter for KMEX-34 Univision Los Angeles, a reporter for WSNS-TV Telemundo Chicago, and a sports anchor for KINT-TV in El Paso.