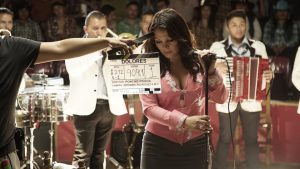 Attorneys for Jenny Rivera’s estate filed a lawsuit against Univision for developing and airing the television series “Her name is Dolores, The Jenn I knew,” based on a book by her former manager Pete Salgado, which reveals confidential information in violation of a non-disclosure agreement he signed with the late star.

The lawsuit claims Univision was notified by Rivera family attorneys that Salgado had signed a non-disclosure agreement, but ignored legal warnings to stop production of the series, opting to move ahead with the project.

The series, currently on the air, premiered on Sunday, January 15.

Univision is accused of interference and inducing breach of contract by providing Salgado with a financial incentive to develop the television Series based on confidential information and of acting “with oppression, fraud, and malice.”

Arguing “the harm to JRE resulting from Univision’s wrongful conduct is enormous,” attorneys seek damages they believe will exceed $10 million.

You can read more details on the accusations of wrongdoing against Univision on Forbes.