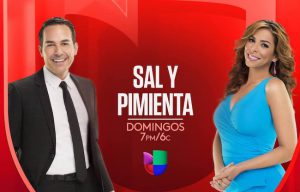 Univision has decided to pull the plug on its Sunday gossip show “Sal y Pimienta” after a 6-year run.

Launched in January of 2011 at 10 pm with hosts Lourdes Stephen and Rodner Figueroa as a vehicle to chat up the network’s Sunday reality shows, “Sal y Pimienta” has had a series of issues in recent years that may have led to a decline in ratings and ultimately, its cancellation.

Figueroa was fired in 2015 after racist comments he made about Michelle Obama. Univision replaced him with Carlos Calderón and Jomari Goyso weeks later.

The show was recently moved from its 10 pm slot to 7 pm, causing a bigger dip in its ratings.

According to an inside source, Univision plans to replace the show at 7 pm with a program produced by the news department tackling immigration news and issues under the Trump administration.