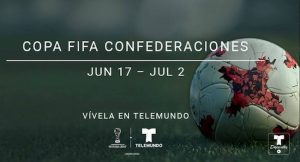 Over the weekend, Mexico eliminated host Russia 2-1, securing a spot in the semifinals. The match, which aired on Saturday, June 24 at 11 a.m. ET, delivered an average of 2.2 million total viewers and nearly 1.3 million adults 18-49, outperforming Fox by 186% and 256% respectively.

Telemundo’s digital platforms broke record numbers through the group stage of the tournament, scoring its top six most streamed matches ever.

Mexico vs. New Zealand (June 21 at 2 p.m. ET) ranks at the top with 5.6 million streaming minutes, followed by Mexico vs. Russia with 4.9 million minutes consumed.

The June 24 Mexico vs. Russia game ranked as the #1 most social event across all broadcast & cable, regardless of language.