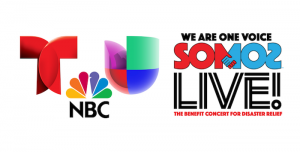 For the first time in Spanish-language television history, Telemundo and Univision are joining forces to simultaneously broadcast a special benefit concert.

The rival networks have teamed up with superstars Jennifer Lopez and ex-husband Marc Anthony for “One Voice: Somos Live! A Concert For Disaster Relief” to help provide food, shelter, medicine, power and communications to the areas affected by the  devastating natural disasters throughout the southern United States, Mexico, Puerto Rico and other areas in the Caribbean.

“One Voice” will air in Spanish simultaneously on Telemundo and Univision this Saturday, October 14 from 8 to 10 p.m. ET/PT, with NBC joining the telecast for the third hour in English at 10 p.m. The star-studded concert will air time delayed in the West Coast.

Azteca América announced it will also air the “One Voice” benefit concert from 8 to 11 pm ET/PT.

You can read more details about the historic event on Forbes.