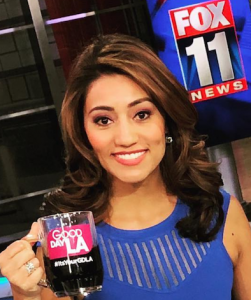 Back in October, she spent a few days on the morning show as a guest anchor visiting from Houston Fox station KRIV.

This marks a return to LA for Texas native, who freelanced as a reporter at KCBS/KCAL for three years before moving to the KRIV in 2011 for a weekend anchor job.

She moved to anchor weekday mornings at the Houston station in 2013.

Her last day at KRIV Houston was December 4.