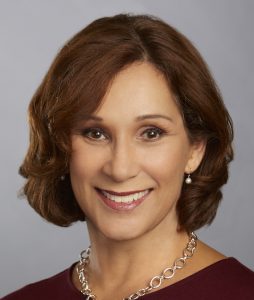 Her name may not be recognized nationwide, but Val Zavala has been a well-known fixture in Los Angeles television for the past three decades, as a reporter, anchor and executive producer of award-winning shows “SoCal Connected,” “Life & Times” and public affairs programs.

But after 30 years at KCET, the multi-Emmy award-winning journalist has decided to retire, leaving her role as anchor and VP of News & Public Affairs.

“I think what I’ll miss most is the people I work with,” she tells Media Moves. “There’s a lot of difficult people in this industry and I’ve been so fortunate that KCET has always attracted people who are just so wonderful to work with. I’m going to miss that team, living a more quieter, solitary life – and I’m ready for that.”

Zavala joined KCET in 1987 after spending six years as a general assignment reporter at stations in San Luis Obispo, Fresno and San Diego. KCET was a PBS station until 2011, when it became independent.

“Being at KCET has been fundamental to my being in the broadcasting business this long. If I had not made the switch to public television in 1987 and stayed in commercial, I would be in another field by now, because I could see that even back then commercial news was not really where my heart was,” she says.

Now that she’s retiring, Zavala says she’s “going to really chill.” She has no immediate plans, but for the time being, will continue her volunteer work.

“I’m on the board of Alzheimer’s Greater LA, I’m also quite active with Mount Saint Mary’s University, which is a really wonderful college that gives Latina opportunities and I also volunteer for hospice. I do life reviews for people who are in hospice at the end of their life,” she says. “Maybe after six months, I may want to take another project.”

KCET will broadcast “A Special Edition of SoCal Connected: 30 Years With Val Zavala” tribute honoring her contributions and legacy on on Tuesday, February 13 at 8 p.m. and again Wednesday, February 14 at 7:30 p.m.