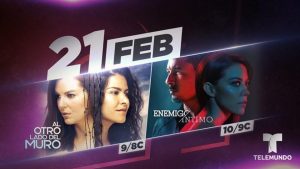 Telemundo borrowed a page from its highly successful 2016 multi-premiere strategy last night to boost its primetime ratings – and it has paid off.

The social impact of both shows was also big. “Al Otro Lado Del Muro” ranked as #1 and “Enemigo Intimo” as #2 most social Spanish-language programs on premiere day.

Telemundo previously debuted three series at the same time – from 8 to 11 pm – in July 2016. That move catapulted the network to the No.1 spot in primetime, beating rival Univision for the first time in its history.

Telemundo president Luis Silberwasser spoke about the strategy and the network’s growing production budgets to create higher quality content for a more demanding audience for my story about the series’ double premiere featured in Forbes.

A second night  ratings win for the two new shows may be a bit tougher to achieve, since the series will be competing with Univision’s 30th anniversary special “Premio lo Nuestro a la Música Latina,” which this year will honor music legends. In years past, the awards show usually performs well, delivering big ratings.