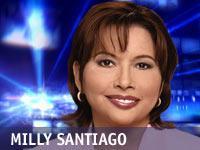 Milly Santiago, who until August of last year worked as reporter for Telemundo-44 in Chicago, has landed a new job… at the governor’s office.

A Puerto Rico native, Milly has been in Chicago since 1978. She started her broadcast career in radio, before moving over to TV. She has worked for both the Univision and Telemundo stations in Chicago.