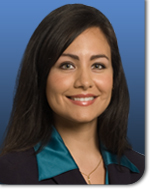 If you look at WFLA’s Website today, it still lists Katie Coronado as co-anchor of “News Channel 8 at 10pm on My TV 38” with Peter Bernard Monday through Friday from 10-10:30pm. But in his blog, media critic Eric Deggans says the anchor team has been taken off the set and sent out on the street, to reporting jobs.

The newscast, which started back in October of ’07, barely gets a 1 rating. Anchors Gayle Sierens and Keith Cate will take over the 10 pm show.

Katie also anchors daily Spanish-language Webcasts on centrotampa.com. Before joining News Channel 8, Katie worked at WESH TV in Orlando as a writer/producer. She began her career as a reporter/producer for the Telemundo affiliate in Orlando.