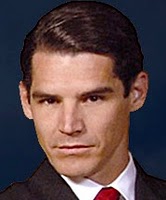 The half-hour show is hosted by Daniel Garza, a former White House Public Liason officer, who until recently was the president of Hispanic and Poder magazines. The show is broadcast from Washington, D.C.