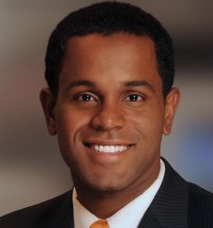 Duarte Geraldino is the newest addition to the CW33 Dallas news team. He most recently left FOX-owned KRIV-26 in Houston.

He was at WMAR-2, the ABC affiliate in Baltimore for a year, before moving to Houston’s KRIV in 2007. He previously worked at WCMH-4 (NBC) in Columbus.

Geraldino was a Wall Street corporate financial analyst before jumping into a news career. His first gig was at the CNN’s NY bureau assignment desk.