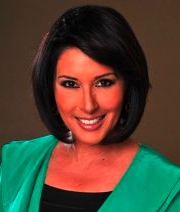 Inside sources confirm Univision anchor/reporter Edna Schmidt is no longer with the company.  I’m told she was let go on Sunday while in New York, where she had gone to do 9/11 coverage.  A Univision rep refused to comment on Edna’s dismissal.

Earlier this year, Edna was taken off the weekend news anchor desk, along with co-host Enrique Teuteló, as part of the network’s talent changes. Enrique was let go, while Edna was missing in action until she was finally given a role sharing the 11:30 pm newscast anchor duties with Ilia Calderón.

Prior to the talent changes, Edna had been weekend anchor of “Noticiero Univision” since 2005.  She was previously news anchor for “Noticias Al Minuto” on TeleFutura and a correspondent and regular contributor for news magazine “Aquí y Ahora.”  Before that, she spent 10 years in Chicago as anchor for Univision’s WGBO-66.