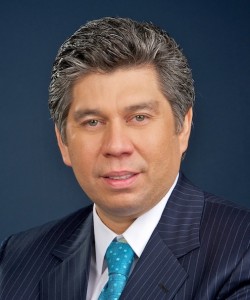 A little more than a year after joining Univision as VP of Network News, Daniel Coronell has been promoted. He is now Senior Vice President and Executive News Director.

Daniel was hired by Univision in January of 2011 as part of a series of management changes at the network.

Prior to his arrival at Univision, Daniel was in charge of “Noticias Uno,” a national newscast on Colombia’s Canal Uno.