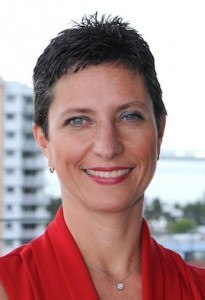 María Badillo has joined Viacom International Media Networks (VIMN) the Americas as Vice President of Programming & Production of MTV’s Tr3s.  She started the job this week.  She’s based in Miami and reports to Fernando Gaston, Brand Manager for Tr3s.

In this newly created role, Badillo will lead the company’s programming strategies and original production output across all Tr3s content platforms.

Before Tr3s, she was Director of Programming and Acquisitions for Discovery Networks Latin America/US Hispanic, responsible for developing programming strategies across multiple brands. From 2009-2012, Badillo took on multiple roles at Discovery including Branding Entertainment Producer.

Badillo was previously SVP of Programming at ¡Sorpresa! Network, a children’s television channel.  Prior to that, she spent almost 6 years as Programming Manager at Discovery Communications.  She started her career as a producer in Mexico.