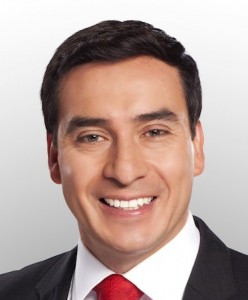 Telemundo 52-KVEA officially announced today that Edgar Muñoz has joined the station as co-anchor of its 6 and 11 pm “Noticiero T52” weeknight newscasts.  His first day on the air is Monday, March 11.

Back in January, I reported that Edgar had resigned as Univision’s Mexico City correspondent and that Telemundo had hired him as a co-anchor for their Los Angeles station.

Edgar will be sharing the desk with current anchor Ana Patricia Candiani, who joined KVEA as a solo anchor in January of 2011.