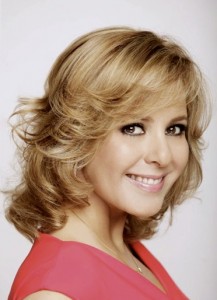 After months of speculation, Telemundo today confirmed that Ana María Canseco is joining its morning show team.  The announcement was made live during this morning’s “Un Nuevo Día,” with Ana María on the set.

She had been occasionally doing some morning guest appearances during the past few months. She officially starts her new co-hosting gig on September 9.

This is a return to morning television…. and to Telemundo for Ana María.  She was one of the original co-hosts of Univision’s “Despierta América,” where she spent 13 years, from 1997 to 2010, when she was removed from the show. She previously worked for KVEA-52 Telemundo as an entertainment reporter and before that, she worked for KVDA-60 in San Antonio.

Less than 2 weeks ago, co-host Omar Germenos abruptly left the morning show, after co-hosting it for a little over 2 years.