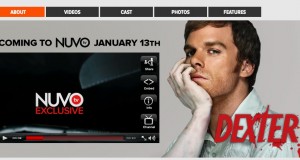 NUVOtv is expanding its programming options. Today, it announced a content licensing agreement for the basic cable syndication rights to the SHOWTIME drama “Dexter.”

The award-winning series, which ended its 8 season run this summer, will make its basic cable premiere on NUVOtv on January 13, 2014.

The network will air all episodes for all the seasons uncut and in their entirety.

The series features a stellar cast of Latino actors, including Lauren Velez, David Zayas, Angel Juan Marcos Batista, Aimee Garcia, Christian Camargo, Edward James Olmos and Jimmy Smits, to name just a few.  In support of the series’ January premiere on NUVOtv, the network has launched a dedicated area on its website at mynuvotv.com/dexter.