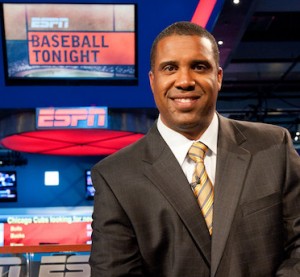 In addition to studio analysis, Pérez will contribute to select game telecasts, beginning with ESPN’s Spring Training coverage.
The former baseball player will join Steve Levy to call the Washington Nationals at St. Louis Cardinals game on Wednesday, March 26, at 1 p.m. ET, followed by the Nationals at New York Mets on Thursday, March 27, at 1 p.m.
Pérez was previously a Baseball Tonight analyst at ESPN from 2006 through 2010. In 2011, he joined the Miami Marlins as their hitting coach. He was most recently the bench coach for the Houston Astros during the 2013 season.

In 2008, Pérez was named Manager of the Year in the Puerto Rico Baseball League, leading the Leones De Ponce to the league championship. He also managed Colombia in the World Baseball Classic qualifying round in 2013.