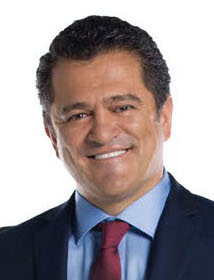 Mexican soccer star Carlos Hermosillo joins the Deportes Telemundo team as a sports commentator.  His first appearance on network will be on Wednesday, March 12 as a guest on “Titulares y Más,” at 11:30 pm ET. He’ll debut as a commentator on Saturday, March 22 at 10 pm ET.

Since retiring from the field, Hermosillo, who holds the record as the second top scorer in Mexican soccer history, has had a successful career as a sports commentator.

Hermosillo got his start in professional soccer in 1984 as a forward with Club América, which he led to four league championships.  He also played with other Mexican teams, including Monterrey, Atlante and Guadalajara, and helped bring home league titles for Necaxa and Cruz Azul.

He also starred on the field in Europe with Standard Liège (Belgium), and in the United States with the Los Angeles Galaxy.