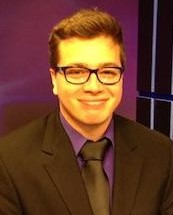 Reporter Victor Correa has been promoted to 10 pm anchor at WDAZ, the ABC affiliate in Grand Forks, North Dakota.

He starts his new role next Monday, April 14.

Victor started his professional broadcast career at WDAZ. He joined the station as a reporter after graduating from the University of North Dakota in 2012.