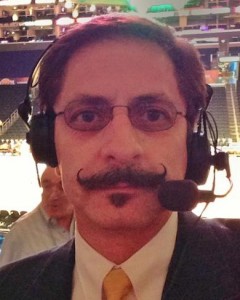 Fernando González, who has been the Los Angeles Lakers Spanish-language play-by-play radio announcer since 1996, is suing the NBA team and Time Warner Cable for $1 million, claiming discrimination and harassment.

In the complaint, filed in the Los Angeles Superior Court on Tuesday, May 27, González states he and his co-broadcaster, Pepe Mantilla, have been treated “differently from and less favorably than his Anglo-American counterparts in terms of wages, hours and conditions of employment,” by the team and have been denied perks, such as season tickets and valet parking that other Laker broadcasters and their families have received.

Among the examples cited in the lawsuit: when the Lakers won the NBA championship in 2000, “almost all” the staff members and broadcasters got a $6,000 commemorative ring, but González and Mantilla did not. They were told they had to pay $3,000 each to get their rings.

The lawsuit states that after legendary broadcaster Chick Hearn intervened on their behalf, González and Mantilla had their checks returned and were able to keep the rings.

The lawsuit additionally states that when the Lakers and Time Warner Cable signed a 20-year, $3 billion deal to launch TWC Sports and TWC Deportes networks, they hired younger sportscasters for the Spanish-language play-by-play television broadcasting “with no experience in basketball,” excluding  González and Mantilla.

Those hires were Adrián García Márquez and Francisco Pinto.

González claims the Lakers “retaliated” against him when he complained, by offering a “new contract with only half the work” and “half the compensation.”

That contract, signed in 2012, runs through September 30, 2015, but González fears it won’t be extended because of his discrimination claims.

The suit seeks at least $1 million for “compensatory damages, including lost wages, earnings, income and other employee benefits, together with interest on these amounts; for other special damages; and for general damages for mental pain and anguish and emotional distress.”