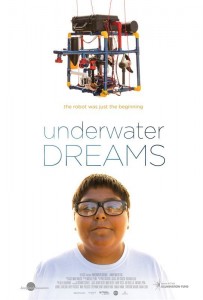 MSNBC and Telemundo will simultaneously broadcast a special one-hour television version of the documentary “Underwater Dreams,” which chronicles the story of four teenage boys, sons of undocumented Mexican immigrants who entered a sophisticated underwater robotics competition, and against all odds, won.

The documentary explores how enthusiasm, dedication and perseverance from the four boys and the two high school science teachers that helped them, made their dream a reality.

The film, by award-winning filmmaker Mary Mazzio and narrated by actor Michael Peña, airs this Sunday, July 20, 2014, at 1 pm ET.

As part of the efforts to reach Latino families with this inspirational message, AMC Theatres has committed to hosting 100 community screenings, free of charge, across the U.S. to enable school and non-profit groups to see the film on the big screen this summer and fall.