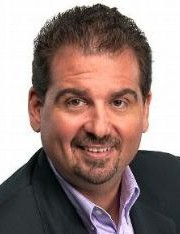 Dan Le Batard, host of ESPN’s TV show “Highly Questionable” and “The Dan Le Batard Show” on ESPN Radio, is back on the air today after a two-day suspension.

ESPN took Dan off the air from both his TV and radio shows on Thursday and Friday of last week, because he pulled a national stunt without previously getting approval from the network.

Dan, who’s based in Miami, took issue on his radio show that LeBron James didn’t thank his Miami fans in a letter in Sports Illustrated in which he announced he was returning to Cleveland.

So, taking a jab at the basketball star, his show bought several billboards that will be displayed for a month in Cleveland that read “You’re Welcome, LeBron. Love, Miami” with a picture of two championship rings he won with the Miami Heat.

ESPN didn’t find his humor funny and suspended him. “His recent stunt does not reflect ESPN’s standards and brand. Additionally, we were not made aware of his plans in advance,” the sports network said in a statement.

On a column he published today, Dan tells “the rest of the story.” He acknowledges he deserved the suspension because he was insubordinate and explains how the whole situation went down.