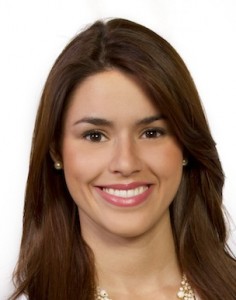 Bianca Graulau has landed her first job in English-language news. She starts as a reporter for KXTV News 10 in Sacramento next Monday, September 29th.

She joins the station from KUVS Noticias 19 Univision in Sacramento, where she only spent one year as a video journalist.

“KXTV news director Jerome Parra reached out to me saying he would like to talk about a job opportunity with News 10,” says Bianca about how she scored her crossover opportunity. “We started communicating, I showed him some of my work in both Spanish and English and that led to the job offer.”

Bianca says she “couldn’t be more excited about this new challenge” because she’s “passionate about journalism in both languages.”

Bianca’s last day at Univision 19 was August 25th. She previously worked as a multimedia journalist for KVER Noticias Univision Notivalle in Palm Springs – her first job out of college in May 2012.