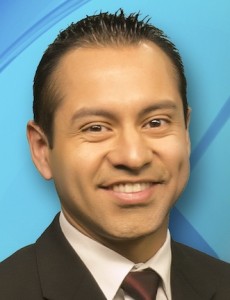 David Miguel Iñiga has moved up more than 15 markets from Laredo to Austin. He’s now sports anchor/reporter at Telemundo Austin.

“I am psyched about my new job at Telemundo Austin and I am looking forward to covering Longhorns’ football, baseball, and basketball. I covered the NBA Finals the last two years and I hope to cover the NBA playoffs again this season,” says David. “It’s exciting to work in one of the fastest growing cities in the United States after spending the last 2 plus years in Laredo.”

Before moving to Texas, David was a reporter for KGET-KKEY, the NBC and Telemundo affiliates in Bakersfield. He previously worked as a sports anchor/reporter/photographer in Tyler, Tx for CBS19 and Azteca 18. Before that, he was a line and field producer for KVEA and KWHY-22 in Los Angeles.