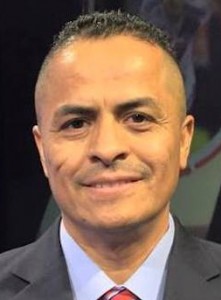 Germán Acevedo, a graphics operator for Time Warner Cable Sports in Los Angeles, is looking to enter the world of politics.

He’s the only Latino vying for a position in the Pasadena City Council. He has been running a very low-budget, grass-roots campaign for the part-time position.

Among his reasons to run for City Council, he tells Media Moves: “In 2006, my brother was shot and killed in Pasadena and up to now there are no suspects or arrests on the case. As the Pasadena PD puts it, it is one of those cold cases.”

He says he was also victim of real estate fraud, but after filing criminal charges with the district attorney and a 16-month battle in court, won his case.

A says he felt it was necessary to get involved in politics to inspire change and help those who “can’t help themselves.”

It’ll be a tough race for Germán, who has to beat four other competitors for the District 1 seat. Additionally, he has no other political experience.

Polls close tonight at 8 pm. Today’s election serves as a primary. If no one gets more than 50% of the vote, the top two candidates will go for a second round on April 21.