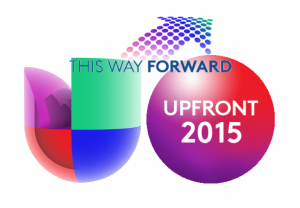 There’s a new label to refer to Latino millenials who are bilingual. “Billenial.” And Univision is planning to showcase how it’s evolving with its audience by “tailoring” content to target this group at its annual Upfront presentation next Tuesday May 12 in NYC’s Lyric Theatre.

Former President Bill Clinton will be among the special guest appearances and international music superstar Ricky Martin will do a special performance.

Key highlights of Univision’s presentation include:

·         UCI Performance Index – With the unveiling of the UCI Performance Index, Univision will make the case for the power of UCI properties to outperform English-language media in generating results among Hispanic consumers across the three R’s – Reach, Resonance and Reaction.

·         Univision Network Brand Campaign – the company will unveil a comprehensive brand campaign that will enhance the the core values of the Univision brand. “Todo es Posible” is dedicated to highlighting the journey of Hispanics in the U.S.

Univision also revealed its 2015-16 programming lineup in advance of the Upfront:

“A Que No Me Dejas Corazón” – (Monday – Friday, Primetime, Televisa)

“NBL Diez” (NBL 10) – The first show ever to top Facebook’s Weekly Buzz rankings, NBL turns 10 in 2016. Popular runners-up from past seasons come back to battle for the crown, and fans determine the challenges they’ll face. (Sunday, Primetime – Univision)

“Niño Santo” – This weekly dramatic series explores the classic conflict between what you believe and what you see. Written by Mauricio Katz and Pedro Peirano. (Canana and Canal Once, distributed by Engine Entertainment)

“Logout” – This crime drama offers a transmedia second screen feature that will give viewers exclusive access to digital content in real time as part of the linear story. (Primetime – Televisa).

“Esmeraldas” – Based on the real-life wars over emerald trades in Colombia. (Primetime, Caracol)

“UD Fantasy”- The launch of UD Fantasy in July 2015 aims to engage the 41 million players of fantasy sports, “our sport within the sport.”

“The Senadoras Search” – “República Deportiva” is looking for talented and beautiful women to be a part of the show and represent the Univision Deportes brand across UCI shows and at live events. Preliminary rounds will be held on digital platforms, with exclusive content, a fan voting process, and social media interaction. Finalists will go to Miami to determine who is chosen as the 2016 class of Senadoras.

“Top U.S. Latinos” – Univision recognizes, celebrates, and empowers the Latinos whose distinctive work in their fields of expertise demonstrates the positive impact U.S.

“Violación de un Sueño: Jornada Nocturna” (Rape on the Night Shift) – Following up on the award-winning collaboration that produced “Rape in the Fields/Violación de un Sueño,” Univision, Frontline, The Center for Investigative Reporting (CIR), the Investigative Reporting Program (IRP) at UC Berkeley, and KQED are teaming up again to examine rampant sexual abuse of immigrant women in the janitorial industry.