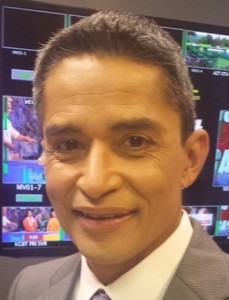 Eddie Flores has joined KGBT as a weekday evening anchor. His first day on the air is next Monday, July 13.

He’ll be anchoring the 5, 6 and 10 pm newscasts alongside Marcy Martínez. He replaces Ryan Wolf, who  left the station in January.

Prior to coming on board the Harlingen CBS affiliate, Eddie spent 12 years as weekend anchor/reporter at KRGV in the Rio Grande Valley.

A former U.S. Marine, he landed his first broadcasting job as weekend Sports Director in Yuma’s KYMA after leaving the military in 1989.