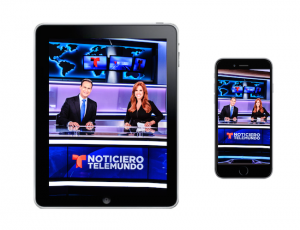 Journalists will be reporting using smartphones and tablets to capture and feed their stories.

This will mark the first-time on record that a national network produces and airs an entire newscast shot on mobile technology.

“We are changing the way news is made by embracing all aspects of digital technology,” Luis Carlos Velez, Telemundo’s EVP of Network News, said in a statement. “Smartphones and tablets have become increasingly popular ways to get informed. We want to maximize their utilization by adding to our groundbreaking storytelling.”

“Noticiero Telemundo” recently launched two segments produced with mobile technology: “The Selfie Interview,” a news entertainment segment in which the interviewee asks and responds his own questions and “Mi Lente,” a story fully recorded with portable cameras to profile compelling characters in their own environments.

UPDATE July 3, 2015: Contrary to what the network promoted, “Noticiero Telemundo” was not shot entirely on mobile devices. Only a portion of the news reports and the live newscast made use of mobile devices in the production and airing of the program.