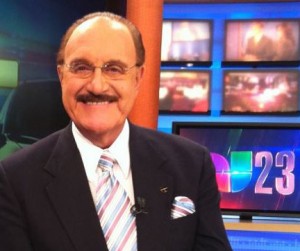 It will be his final newscast as primetime anchor at the Miami station, a post he has held for the past 4 decades.

After tonight, Benites will be given the title of “anchor emeritus” and chief correspondent.

Alina Mayo Azze will be anchoring solo next week until Ambrosio Hernández, who left his anchor job at Telemundo 51 in March, takes over Benites’ role on Monday, September 28.

The station is hosting a farewell celebration honoring his legacy and “service to the community” right after the newscast.