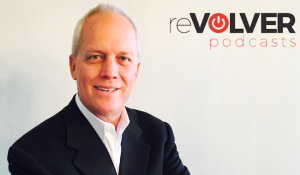 Not to be confused with a gun, reVolver is pronounced re-vol-VER, as in “mixing” in Spanish.

And that’s his objective, he says – to “mix it up” in the audio space with multicultural-targeted, bi-lingual, podcasts. Although he’s starting out focusing on the Hispanic marketplace, he stresses he plans to expand to LGBT and Asian programming at a later date.

Hobbs, who spent almost 28 years at Univision Radio in top executive sales positions and moved to SBS in 2013 to help the company launch the Aire Radio network, is now calling the shots as an entrepreneur. He’s also self-financing his start-up.

“It’s a lot of hard work and there are many moving parts, but as an entrepreneur, you get to make your own decisions,” he tells Media Moves. “But that’s not to say I wouldn’t look at media partnerships.”

The announcement of reVolver’s launch comes just one month after Hernan López, the former CEO of Fox International Channels, unveiled his own podcast startup Wondery.

“Yes, I saw that,” says Hobbs. “That’s great. It brings share of eyeballs, ears and more attention to the platform. I congratulate him. I think we’re a little ahead of the curve on digital audio programming.”

Hobbs says he took the summer off after his exit from SBS before starting to develop this audio platform.

“I had to learn the business. You have to know what verticals and production is correct. You want something to have something sticky enough that people that will go back to your platform. I’m very excited of what we accomplished from a talent and sales standpoint. Just today, we got 15 requests from talent for ideation,” he says.

Hobbs and his small team are working on building partnerships to create, co-develop, and distribute the content that will live on reVolver.

The podcasts will be 35 to 60 minutes and will be produced once a week with the option to do more if the talent or show hosts so choose.

“I’m letting them be free within their own artistic realm,” says Hobbs. “But with everyone having so much ADD nowadays, we’re trying to keep the shows ‘snackable.’”

Several of the podcasts feature talent Hobbs worked with at Univision Radio, like Carlos Álvarez, Julie Stav, and Dr. Aliza Lifshitz. Many of them had shows on Univision Radio, which were cancelled when the AM network restructured and switched from a talk to music format.

In addition to the current line-up, he’s expecting more well-known names and celebrities to join in. Actor/singer Carlos Ponce just signed up to have his own podcast. Sportscaster Jessi Losada will soon also have a space on the digital audio network.

According to Hobbs, the podcasts will only have four advertising breaks per show.

An added feature of RevolverPodcasts.com is Festnet – a global, digital video network that will live stream multicultural music festivals across the country.

“I have a long pedigree in the festival world – at Univision and SBS. So, it just felt like the right fit to add this.”

Hobbs says the company has already signed agreements with 30 festivals. “This gives us a video and audio element within reVolver,” he points out. “It’s a new world we’re living in. You can see the festival the day of the event or 5 days later.”

Will the live streaming have advertising?

“You know I’m all about advertising,” he laughs. “You can bet there will be commercial elements within the show. It could be crawls or on-stage signage. We’re going to get creative.”

Hobbs says he has been meeting with major ad agencies in New York and Chicago and “everyone was enthusiastic to put it on plan.”

If all goes as he plans, he expects the company to see a profit “by the end of this year.”