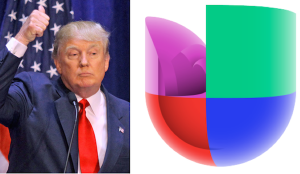 Donald Trump and Univision have reached an agreement in the $500 million lawsuit the real estate mogul filed against the network after it cancelled the 2015 broadcast of the Miss Universe and Miss USA pageants.

At the time, Univision also broke all ties with the presidential candidate over disparaging comments he made about Mexicans.

In his lawsuit, Trump alleged breach of contract, defamation, and accused Univision of trying to suppress his freedom of speech and of colluding with NBC.

The lawsuit revealed Univision paid $13.5 million for the rights to broadcast the Miss USA, Miss Teen USA and the Miss Universe pageants from 2015 through 2019.

Univision filed a motion to dismiss the lawsuit in December, calling it “beyond frivolous.”

Univision attorneys argued Trump “caused Miss Universe to breach first” when he disparaged Mexican immigrants, calling them drug smugglers, criminals and rapists during a presidential campaign speech. In doing so, he destroyed the value of the Miss Universe broadcast rights.

The terms of the settlement were not disclosed. Trump, who was vocal in his disdain of Univision and bragged about his lawsuit on Twitter last year, didn’t even send one tweet about the end of his legal feud with the network.

In a joint release, Trump and Univision President and CEO Randy Falco acknowledged they’ve known each other for over 20 years. Trump stated: “I’m glad we are able to put these differences behind us,” while Falco expressed “we are pleased to settle this matter and move forward.”

His controversial remarks also caused NBC sever ties with Trump and led to the network dumping the pageant as well. NBC eventually sold its stake in the Miss Universe Organization and Trump sold the pageant to the talent agency WME-IMG in September of last year for an undisclosed sum.