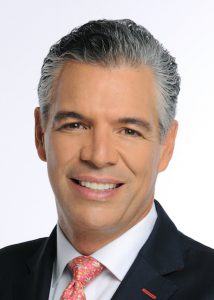 Alcobe will be based in Miami and report to former Univision President and current NBCUniversal Telemundo Enterprises Chairman César Conde.

He replaces Enrique Caballero, who will remain with the company for the next few months “to ensure a smooth transition and help NBCU with special projects,” according to a company spokesperson.

In his new role, Alcobe will manage organizational change initiatives to attract and retain top talent as the company prepares to merge the workforces of Telemundo Network, Telemundo Studios, NBC Universo, Telemundo Digital Media, Telemundo International and NBCUniversal International into the new state-of-the-art global headquarters, scheduled to be inaugurated in January of 2018.

Alcobe was most recently SVP of Administration for Univision Networks, where he oversaw human resources and administration and launched the network’s education week initiative “¡Educate! Es el Momento” and TeletonUSA.

Prior to Univision, he held key leadership roles in New York City at Interpublic Group (IPG), Havas, and WPP, among other companies.