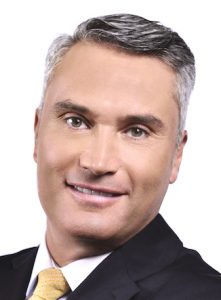 Telemundo network correspondent Edgardo del Villar is moving on to a new job with the company’s New York station, WNJU 47.

Nilda Rosario had been co-anchoring the 5 and 5:30 pm shows since they launched in September of last year. She’ll continue to co-anchor the 6 and 11 pm newscasts with Jorge Ramos.

Del Villar has had his share of moves within the network. He first joined Telemundo in 2013 as a correspondent and fill-in presenter several of the network’s programs and was promoted to weekend anchor when “Noticiero Telemundo Fin de Semana” launched a year later. But in March of 2016, he was bumped from the anchor desk to make way for Luis Carlos Vélez, who took over the role.

Prior to joining Telemundo network, del Villar was anchor of “Las Noticias,” Televisa’s primetime newscast in Monterrey, Mexico for 12 years. He also worked as a news director and anchor for several radio networks, including MVS, Radio Fórmula and Núcleo Radio Monterrey for more than 10 years.