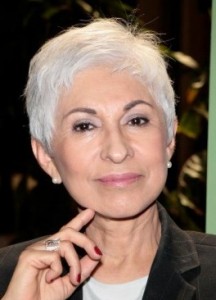 After a 42-year television career, anchor Ysabel Duron has announced she’s retiring from KRON-4 in San Francisco.  She has been with the station almost 23 years.

A weekend anchor of “KRON 4 Weekend Morning News,” Ysabel joined the station as a general assignment reporter in 1990.  She was named morning weekend anchor in 1992.

Ysabel’s last day on the air is on her birthday – April 14, although she officially retires on the 16th.  She says she purposely picked that day: “I celebrate my birthday and the beginning of my encore career.”

Ysabel says she had been seriously thinking about retiring since last year, so she could focus 100% of her time to Latinas Contra Cancer, the non-profit she founded in 2003 to provide help for Latinos around issues of cancer, particularly in the low-income, Spanish speaking community.

“I was starting to lose energy and I needed to focus,” Ysabel tells me.  For over 10 years, she has been the Executive Director of Latinas Contra Cancer, working full time for the non-profit on weekdays and anchoring on weekends.

A cancer survivor, she has become a fierce advocate for Latinos facing this deadly disease.  She sits on numerous boards and committees that seek to influence policy and push for more cancer research for women of color.

Ysabel is the founder and organizer of the first National Latino Cancer Summit.  Held every 2 years since 2008, last year’s summit addressed the impact of the environment on cancer and Latinos.

“Putting my time in Latinas Contra Cancer is of great value.  We’re strategically in a position to be advocates and policy leaders on issues of cancer that can help our community,” says Ysabel.

Ysabel has received numerous awards and recognition for her work in television and as a cancer advocate. She was inducted into the National Academy of Television Arts and Sciences’ “Silver Circle” for more than 27 years of meritorious work as a journalist.  In 2009, she was inducted to the National Association of Hispanic Journalists’ Hall of Fame. In 2011, she was honored with the Latino Spirit Award, given by the California Latino Legislative Caucus recognizing distinguished Latinos for their contributions and dedication to California.