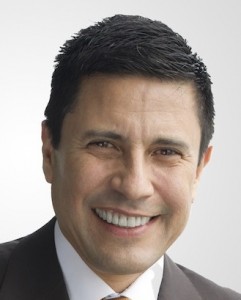 Sergio Urquidi is back at Univision.  He starts a new job as lead weekday anchor for “Noticias Univision Arizona,” Monday-Friday at 5 and 10 pm.  His first day is March 18.

Sergio joins the anchor team of Mary Rabago and Felipe Corral.  He replaces Rubén Pereida, who left the station to join Telemundo Arizona as its lead anchor.

A former Univision Network News anchor, Sergio was most recently the lead anchor for “El Opiniario,” a news/features/opinion show airing on SOI TV, an online Spanish-language network in the U.S. focusing on the principal trending topics in social media.

From 1997 to 2009, Sergio anchored the weekend edition of “Noticiero Univision,” was senior correspondent and substitute anchor for the network’s late-night newscast “Última Hora,” and  was a correspondent for the primetime newsmagazine “Aquí y Ahora.”