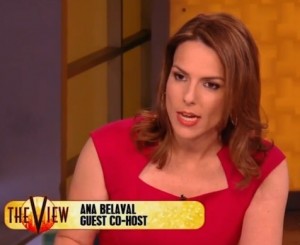 Two spots have recently opened up on ABC’s “The View.” You would think this is a perfect opportunity to finally give one of those slots to a Latina co-host.

WGN-TV reporter Ana Belaval got a guest-host shot last Tuesday, sitting in with the women of “The View,” although when she shared her experience with her Chicago colleagues she said didn’t get much of a chance to participate.

Ana is an Emmy-award winning reporter, who has spent the last 9 years at WGN. She was previously a Univision network correspondent and a local news anchor. She has experience and charm and was very grateful for the opportunity.

It seems like every so often ABC tries out a Latina host, but isn’t truly committed to bringing one on board.

Now, one of the two slots suddenly open is already gone… Rosie O’Donnell is returning to the show after a 7-year absence.

The show has been on the air for 17 years. During that period of time, the producers have only invited a handful of Latinas to guest host: Naibe Reinoso in 2003 and Myrka Dellanos in 2006.

What will it take for ABC to finally give a full-time seat to a Latina at “The View?”