A major restructuring of Univision’s local media leadership has left several longtime managers out of a job, with some being reassigned, according to a source.

Univision today internally announced it was consolidating several positions as part of its new strategy and revealed the names of its new Local Media team.

As of today, Univision will have one general manager and one director of sales in each market representing all of its local media assets. That means the GM in each market will have an expanded role and oversee both TV and radio, eliminating one top level manager position.

Sources have confirmed that due to the restructuring, Mike Rodríguez, VP and GM of Univision and Telefutura in Miami since March of 2012 is no longer with the company.

Larry Sands, Regional VP of Univision Chicago since June of 2013, and a company executive for the past 19 years, will assist in the transition and leave at the end of the month. **

Becky Muñoz-Díaz, VP and GM of Univision and Telefutura Dallas, who has held that role for the last 19 years, is also assisting Kevin Cuddihy in the transition, according to a company source.**

Also as part of the leadership restructuring, Alberto Mier y Terán and Jaime Jiménez have both been named EVPs of Local Media. Lee Davis will head sales for Local Media.

Here is the list of the new local media managers: 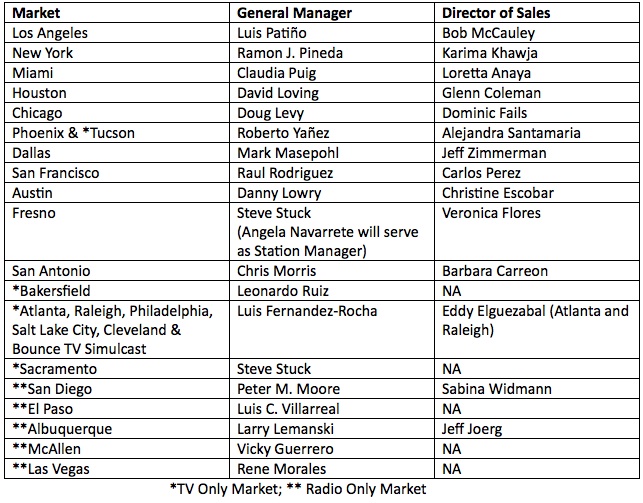 **Correction: An earlier version of the story stated that Becky Muñoz Díaz and Larry Sands were no longer with the company. A Univision source assures Media Moves that Muñoz Díaz is still with the company, although no specifics were given as to her current role. Sands will remain until the end of the month to assist in the transition.