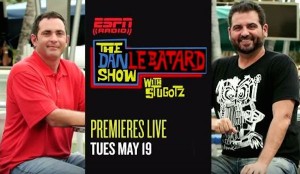 ESPN’s Radio program “The Dan Le Batard Show with Stugotz” will begin its simulcast on Fusion starting on Tuesday, May 19.

The Univision/ABC joint venture initially announced in February it had struck a deal to carry the 3-hour show on the cable network.