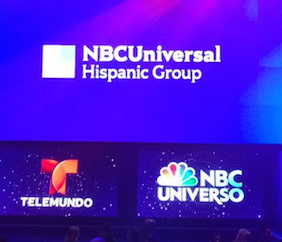 Company executives also recognized the power and impact of Latino culture in the market and pitched “CultureFirst,” an NBCU proprietary strategic approach to help inform advertisers’ decisions when designing campaigns directed to the Hispanic segment.

On the programming front, Telemundo boasted a 20% year-to-date ratings increase in its weekday primetime among adults 18-49, registering a record high share, 6 points more than a year ago, according to Nielsen.

The third season of “El Señor de Los Cielos,” which ranked #1 in Spanish-language in its daypart every night of the week among adults 18-49 and 18-34 delivering a 41% share, has fueled the network’s commitment to stick with its 10 pm strategy of faster-paced, action-packed and shorter scripted drama super series designed to return for multiple seasons.

Among its “Generation M” digital initiatives, the group announced:

“Bajo El Mismo Cielo,” inspired by Roger L. Simon’s original screenplay, “A Better Life,” narrates the story of an immigrant in search of a better future for his children.

“Quién es Quién” – romantic story that leads twin brothers, separated at birth, to embark upon separate paths only to reunite them years later.

“La Indomable,” featuring singer/actress Lucero in her return to telenovelas.

“Doña Bárbara,” featuring Aracely Arambula in a new adaptation of the popular telenovela.

“Francisco El Jesuita” – based on the best seller, “El Jesuita,” the only official and authorized biography of the Pope, this miniseries, chronicles the life and work of Pope Francis, Jorge Mario Bergoglio.

“The 2015 iHeartRadio Fiesta Latina” – music festival sponsored by iHeartRadio that will feature some of Latin Music’s top, best-selling artists, along with and new, up-and-comers.

“Escena Deportiva,” new signature sports show showcasing the latest results, news and highlights from top franchises in the U.S., the Americas and around the globe.

LIGA MX – network will air all of the home games for Leon and Pachuca every Saturday night.

“Top Chef Mexico” – featuring Hispanic chefs from some of the most acclaimed restaurants in the U.S. and Mexico, contestants will compete from some of Mexico’s most beautiful and spectacular locations.

“El Sexo Débil” – dramatic series about five men who have it all and think they’re in control until they’re suddenly abandoned by the women around them.