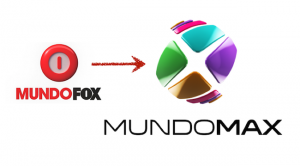 MundoFox, now rebranded as MundoMax, has a new logo. The network, now 100% owned by Colombia’s RCN Television Group, after it bought out Fox International Channels earlier this month, will be officially rebranded MundoMax on August 13. That’s the 3-year anniversary of the broadcast network’s launch.

In a written statement sent to Media Moves, President Ibra Morales says RCN “is wholly committed to the success of MundoMax” and will continue “to offer high quality entertainment programming to our viewers.”

As part of the changes for the network, RCN cancelled “Noticias MundoFox” on July 28, laying off almost its entire news staff. Only anchor Rolando Nichols was spared, because he’s under a multi-year contract.

“In order to move forward and reposition MundoMax and fulfill its full potential, regrettably, it is necessary in the short term for us to eliminate a number of positions across various divisions – a decision that none of us take lightly,” states Morales.

Aproximately 35 people from the news department lost their jobs. There are rumblings that more cuts in other departments are imminent.

Despite the cancellation of “Noticias MundoFox,” Morales says RCN is dedicated to “bringing quality news coverage” to the U.S. Hispanic community.

“To this end, we are currently evaluating our entire portfolio of content and restructuring it with the goal of bringing maximum value to all our stakeholders, including our viewers, clients and affiliates.”

Parent company RCN produces NTN24, an international 24-hour cable news channel. So it is highly likely MundoMax will tap into that NTN24’s resources if the rebranded network were to incorporate news to its lineup.