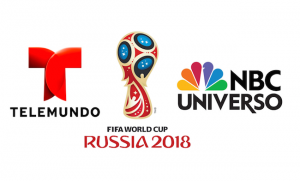 The broadcast and cable networks begin a countdown to the 2018 FIFA World Cup Russia™ with a series of special segments that NBC Deportes is producing for Telemundo, NBC Universo and NBCDeportes.com digital platforms on Friday, September 18 and Saturday, September 19, including the following popular sports programs:

“Titulares y Más” will dedicate its first segment to the preparations under way for the Russia World Cup, now 1000 days away, including footage from the celebration FIFA is organizing in Moscow’s Red Square and ample analysis by hosts Karim Mendiburu and Edgar López. Friday, September 18 at 11:35 pm/10:35 CT.

NBC Universo’s news program, “Escena Deportiva”, airing Mondays and Fridays at 11 pm/10 CT, will present “1000 Days to the World Cup,” featuring commentary by soccer luminaries such as Germany’s Lothar Matthäus and Gianlucca Zambrotta of Italy. The show will announce the dates for the CONCACAF World Cup qualifying games, which will be produced by NBC Deportes for Telemundo and NBC Universo and preview the other FIFA tournaments the two networks will air between now and the 2018 FIFA World Cup Russia™.

“Titulares Telemundo,” airing on Saturday and Sundays at 11 pm/10 CT, will celebrate 999 days to the World Cup with images from the official event in Moscow.