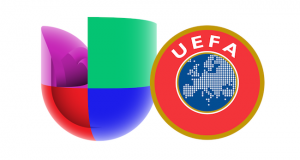 Univision may have lost the rights to air the World Cup to Telemundo, but today it announced it acquired the exclusive U.S. Spanish-language broadcast rights to all UEFA national team competitions from 2018 to 2022.

ESPN currently holds the rights to Euro 2016 and will air matches in Spanish on ESPN Deportes this summer.

The deal will bring European national team soccer action to Univision, which will air the games across its portfolio of networks including Univision Deportes, UniMás and Galavision, as well as streaming the properties via the Univision Deportes app.

Under the new rights deal, Univision Deportes will air multiple live matches on every match-day, daily match highlights on existing Univision Deportes programming and at least one match per kick-off slot for the UEFA Nations League, UEFA Nations League Final Four, the European Qualifiers to UEFA EURO 2020™ and the European Qualifiers to the 2022 FIFA World Cup™.

For the UEFA EURO 2020™, the rights deal includes airing of all matches live and daily match highlights on existing Univision Deportes programming. Univision Deportes will also have exclusive rights to live streaming and digital content.