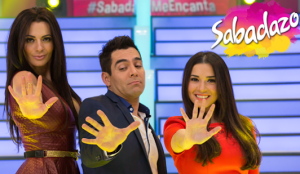 It looks like “Sabadazo,” the Televisa-produced variety show that replaced “Sábado Gigante” tanked with U.S audiences. Univision has taken it out of the 8 pm timeslot and moved it to 12 noon.

A request for comment from Univision on the changes and more details about the replacement show has yet to be answered.

The show previously aired on Univision on Saturdays at 2pm ET/PT.