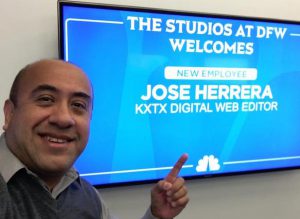 José Antonio Herrera has left his position as Web Publisher at Univision’s KUVN 23 in Dallas for a new job at the station’s main competitor.

He has joined Telemundo KXTX 39, where he is now Digital Web Editor.

Prior to his move to Telemundo, José Antonio spent more than 11 years as a reporter, photographer, editor and social media manager for the www.univisiondallas.com website.

Before moving the U.S., José Antonio worked as an information officer for the Government of Veracruz.