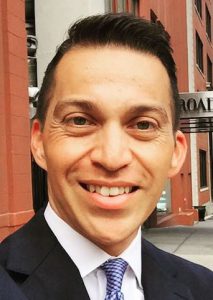 Manuel Bojorquez kicked of this week as the new CBS News’ Miami correspondent.

He left the network’s Dallas bureau, where he has worked since joining CBS in 2012.

The network plans to expand its reporting of Latin America. With that goal in mind and given his recent work in Cuba and Central America, CBS decided to strategically base him in Miami.

“I’m excited about the opportunity to continue and expand our reporting in Latin America, while still covering major stories in the Southeast and throughout the country,” Bojorquez tells Media Moves. “These are important and rapidly-changing times in the region, with US-Cuban relations, immigration, and the relationship between countries throughout the hemisphere.”

In announcing the move earlier this month, CBS management complemented Bojorquez’s “work in Cuba following Fidel Castro’s death, his original reporting on immigration issues along the Texas-Mexico border and his compelling stories from Central America about the forces driving that immigration.”

A native of El Salvador, Bojorquez worked as a general assignment reporter at WSB in Atlanta and KNXV in Phoenix.