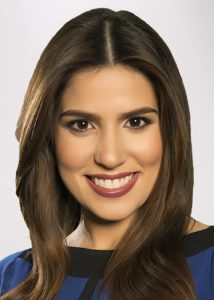 Alejandra Ortiz has been tapped to replace Azucena Gómez, who resigned from KVEA Telemundo 52 last month, as the station’s new weekend news anchor.

She’ll make her on-air debut at the Los Angeles station in mid to late April of 2017.

She’ll be teamed up with sports anchor Saúl Rodríguez and weather anchor Yara Lasanta for the 5:30 and 11 pm weekend newscasts.

Prior to joining Telemundo Las Vegas in March of last year, Ortiz worked for Colombian network CM& as an anchor for national and international newscasts and was also host of lifestyle and entertainment magazine program, La Revista.